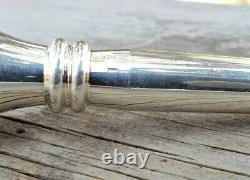 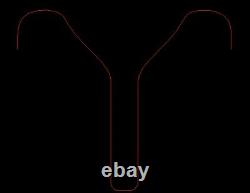 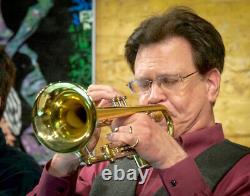 A Kanstul copy of Roger's very own custom mouthpiece, on a Jet-Tone style blank. Only one we know of! A popular and outstanding professional lead trumpet mouthpiece, made by Kanstul Musical Instruments. Roger Ingram is one of the most visible and high profile players of our time, having worked with legends like Quincy Jones, Ray Charles, Wynton Marsalis, and the great Maynard Ferguson.

Roger has been touring and recording since the age of 16 when he joined Louis Bellson's band, whose trumpet section also included Blue Mitchell, Cat Anderson and Bobby Shew. After graduating high school, Roger toured with Quincy Jones and then with Connie Stevens. At age 18, Roger played with Tom Jones on the Vegas Strip. He later toured and recorded with Woody Herman, Maynard Ferguson and Arturo Sandoval.

Roger moved to New York to play and record with Harry Connick, Jr. S band for several years. Along the way he also played with Frank Sinatra, Wynton Marsalis and the Lincoln Center Jazz Orchestra, as well as a stack of Broadway musicals. Roger later toured with Ray Charles, Paul Anka and others. I think the first time I ever saw Roger play was in 1985 with Woody Herman's band at Disneyland; then 1988 on Maynard's first High Voltage tour, which included Wayne Bergeron and Pete Olstad!

Since then I've seen him with Ray Charles on an early date with my now-wife! , Harry, and with Gerald Wilson's orchestra.

He discreetly sat in with my pal Mark Hix's band here in the LA area, and I got to hear him play jazz and work as a section player NOT playing lead! In an intimate setting at a local club.

I see him at trade shows, of course, but it's hard to get in a word with him at ITG or Midwest, just because he's so popular in the trumpet community! The mouthpiece in this listing. This was approved by Roger to be included in the ambitious but short-lived Calicchio Artist Series. This particular mouthpiece is on a Jet-Tone style blank. There are other Ingram mouthpieces on the market of varying specs, but this one pre-dates the Pickett series and is a Kanstul-made copy of ROGER'S OWN MOUTHPIECE!

Kanstul Musical Instruments was a pioneer in single-point scanning and mouthpiece duplication. Before the factory was shuttered, players from around the world trusted Kanstul for their accuracy in duplicating the most valuable and unique mouthpieces, as well as extremely consistent production mouthpieces. Favorite us, and check back as we are listing more interesting and exclusive mouthpieces! The item "Roger Ingram Custom Mouthpiece / Jet-Tone Blank, Made By Kanstul" is in sale since Thursday, April 1, 2021. This item is in the category "Musical Instruments & Gear\Brass\Parts\Mouthpieces".

The seller is "trumpet_charles" and is located in Whittier, California. This item can be shipped worldwide.