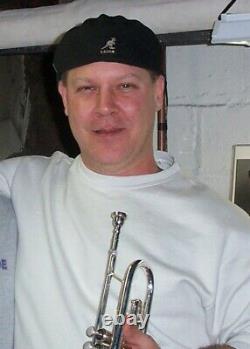 Custom trumpet mouthpiece, made for trumpet player and personality Dave Trigg! Dave is one of the most visible working trumpet players in the community. Dave Trigg's spectacular career started with his first steady gig out of college, playing lead with the Ringling Brothers Show Band in Florida.

From there he went on the national tours with Holiday On Ice, Woody Herman and Maynard Ferguson, as well as performing on Maynard's 1981 release Hollywood. In 1992 Dave joined Natalie Cole's band, touring the world and recording four Grammy winning albums with her as well as episode of PBS Great Performances.

Along the way, Dave performed with many major orchestras including the BBC Symphony, Hollywood Bowl Orchestra, the Boston Pops and the Los Angeles Philharmonic. Dave's numerous TV credits include performances on Arsenio Hall, David Letterman, the Tonight Show, the Grammy Awards, Rosie O'Donnell, Oprah, The Today Show, the Three Sopranos Live, the VH-1 Diva Awards, and with Sheila E's house band for the 1998 ALMA Awards. Other live TV work includes tributes to Brian Wilson and Patti LaBelle. Recording credits include sessions with Dr.

He can also be heard on numerous jingles. Dave is an in-demand Broadway player, and was lead trumpet on the short-lived Hot Feet, a musical that featured an aggressive brass book with music by Earth, Wind & Fire. He's also played on such recent Broadway hits as Legally Blond and Catch Me If You Can, and widely popular revivals such as Pippin, Gigi, Hello Dolly! Career highlights in a career full of highlights includes performances with Henry Mancini, Tony Bennett, Rosemary Clooney, Mel Tormé.

Donna Summer, Chaka Khan, Whitney Houston, Aretha Franklin, Ray Charles, David Foster, and the "Chairman of the Board", Frank Sinatra. The mouthpiece in this listing was made in close consultation with Dave, part of a project that was to include a shallow cup and a deeper cup. This mouthpiece (based on his Calicchio cup) is stamped "1-5 3". The 1 in this case refers to the shallow cup, the 5 refers to a no. 25 throat, and 3 refers to the largest of the backbores we tried.

It is also marked DF, but we do not recall why it was marked that way. The mouthpiece was not entirely to Dave's liking, however, and he decided to go in another direction and this project was abandoned. Nevertheless, this is a fabulous mouthpiece.

The inner rim diameter is 0.630 / 16 mm, and resembles the famous 6A4A used by the great Bill Chase. Throat is a slightly larger no. 25 instead of the standard 27; and an open backbore, all on an elegant blank. Dave is all about efficiency, and his idea was to balance the shallow high-compression cup with a slightly more open throat and backbore combination for use on his medium bore trumpet. This mouthpiece should pair well with any number of pro horns that have Medium or ML bore sizes, from.

Kanstul Musical Instruments was a pioneer in single-point scanning and mouthpiece duplication. Before the factory was shuttered, players from around the world trusted Kanstul for their accuracy in duplicating the most valuable and unique mouthpieces, as well as extremely consistent production mouthpieces. Favorite us, and check back as we are listing more interesting and exclusive mouthpieces!

The item "Dave Trigg Custom Mouthpiece, Made By Kanstul" is in sale since Saturday, July 3, 2021. This item is in the category "Musical Instruments & Gear\Brass\Parts\Mouthpieces". The seller is "brass_maven" and is located in Whittier, California.